Premiership footballer Rory Delap has launched a World Cup range of sausages and burgers at Croots Farm Shop to raise money for a Derbyshire children’s charity. 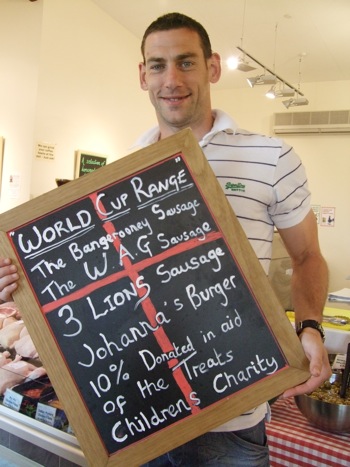 The Bangerooney, the WAG Sausage, the Three Lions Sausage and the Johanna’s Burger have all been created especially to mark the football World Cup.

Ten per cent from the sale of each World Cup sausage or burger will be donated to Treats Children’s Charity, which Croots is supporting this year and which donates money to needy causes in Derbyshire and the surrounding region.

Former Derby County player Rory said: “Treats Children’s Charity is a really deserving cause and I am delighted to help launch the World Cup sausages and burgers developed by Croots Farm Shop to raise money for this charity.

“I’m a big fan of Croots sausages – we shop here as a family – and they are real champions as far as I’m concerned. I really hope that customers will become supporters of the World Cup sausages and burgers and help the staff at Croots to raise as much money as possible for Treats during the World Cup.” 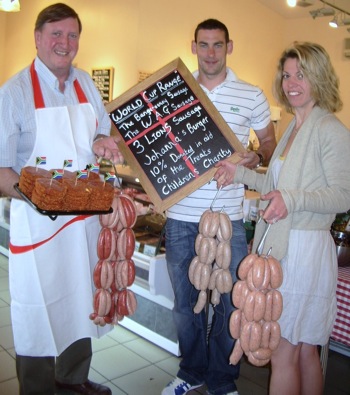 Owner Steve Croot estimates that the butchers, who make the bangers on the premises using mainly free range pork, have sold around 50,000lbs of sausages since the shop opened in June 2008.

That’s the equivalent of 22 tons of sausages – or 28 miles of sausages, if they were stretched end to end.

The World Cup range features the Bangerooney – red and white sausages linked together; the WAG Sausage, which is made from chicken, lemon and tarragon; the Three Lions Sausage, a pork-based banger with a lion’s bite but which contains absolutely no lion; plus the Johanna’s Burger, which is a tasty home-made burger created by the butchers at Croots.

Steve Croot said: “Croots Farm Shop has pledged to support Treats Children’s Charity this year, and we have already made a couple of donations over the past few months. We hope that our customers will get behind our latest fund-raising effort which is a bit of fun during the World Cup tournament.” 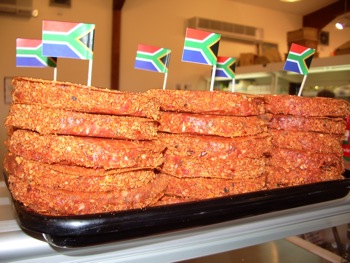 Treats Children’s Charity was launched more than 22 years ago by a group of professional businesswomen in Derbyshire to raise money for the children of Derbyshire and the surrounding region. Over the years, it has donated thousands of pounds to needy causes.