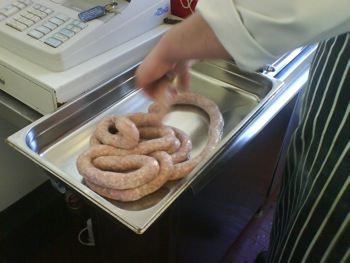 “It makes all the hard work worthwhile.”

Her husband, Russell added: “It was really well attended and competition was fierce.”

When asked what their secret to their success is, Russell replied: “We make sure everything is done properly.”

Sadie said: “We make sure we have traceability and quality in everything we make.”

The family business is no stranger to success, however, as they are Tastes of Lincolnshire and Select Lincolnshire double winners of Best Shop and Producer and also won gold, silver and bronze in the Lincolnshire County Foods awards.

“We’re really proud of what we put into the competition,” Sadie said. “The two awards that stood out for us were gold in the gluten-free sausage award and bronze in the pork pie award.

“The pork pie award in particular because we were against people who had been making them for a hundred years!

“Our Lincolnshire sausage is based on a Victorian recipe and our gluten-free one based on that.