What makes a great sausage? 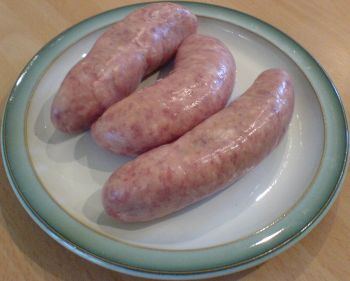 William Browne knows his bangers. The 27-year-old recently launched the Old Spot Sausage Company in Bradford on Avon producing handmade sausages which are sold online and at local markets.

Having studied Countryside Management at college the young entrepreneur went on to work at farm shops in the area where he qualified as a butcher.

But it was a spell working at Bath’s sadly now defunct sausage shop on Green Street which inspired his love of the humble banger.

“It all sparked from my time working at the Sausage Shop,” said William. “Then when I was working at the Hartley Farm Shop we won two silver awards from Taste of the West for the sausages.

“I always enjoyed making sausages and took pride in it so when I decided I wanted to set up my own business it was a bit of a no-brainer.”

Since launching the Old Spot Sausage Company in February it has been a steep learning curve for William.

“I really underestimated how much stuff I would actually need!” he said. “I just thought it would be a case of getting what I needed to make the sausages, pack them and sell them, but it turns out it’s a lot more than that.”

But now William is producing around 2,000 sausages every week, every one of which he makes himself, by hand.

And it’s the love and attention that William puts into the process that he says makes his sausages stand out from the rest.

“Most supermarket sausages are made by machine and have probably never been touched by a human,” he said. “And I think you can tell. They also tend to use collagen casing rather than the traditional intestines and that affects the taste and the way that they look.

“But the most important thing when you’re making sausages is to have good quality pork – you can’t use poor quality meat.”

And it’s bad news for those watching their waistlines because according to William it’s the fat that can make all the difference.

“The fat is very important,” he explained. “I always prefer a fatter pig. You can trim off excess fat, but it’s much harder to add it. That’s the first thing I look for when I pick up the pigs.”

William buys whole pigs and butchers them himself.

“I use the whole pig, not just specific cuts,” he said. “There’s actually some really good meat on the head of a pig, like the cheeks and the bit behind the jaw.

“It seems wasteful to me not to use the whole animal.”

William can produce around 1,000 sausages from a single pig and he doesn’t only make traditional pork sausages – although they say that they are his best seller.

He also experiments with other flavours and regularly produces speciality varieties such as Toulouse, hickory barbecue and even a Ploughman’s variety.

“I enjoy experimenting,” said William. “I’ve been thinking about lots of different types of sausages I could make. I will also make the most popular ones, but it’s good to come up with some different varieties and it means my regular customers can try something different.”

As a small business owner himself William is passionate about supporting local farmers.

“I buy all the pigs from local farmers. For some reason it’s actually cheaper to buy in meat from the continent than to buy British though, which seems crazy to me.

“One thing I pride myself on is paying a fair price to the farmers. They have to make a living, too.