A sausage maker like Charles Clewlow is an inspiration.  I first tried his Dabber Sizzler back in 2005 and I was delighted to finally get to meet him.  He doesn’t have to worry about food miles and ethical sourcing because it’s something he’s always done like his Father and Grandfather before him.  Charles’ beef, for example, is reared 4 miles away and processed 9 miles away.  His pork is reared at the local agricultural college.

This is a town which cares about it’s food.  There are five butchers in the town, a greengrocer and a fishmonger as well as scores of other, small, independent shops.

Aside from the excellence in sausages (and more on that in a minute) when you first see the shop you realise it is not by accident that Charles keeps winning Nantwich in Bloom awards: 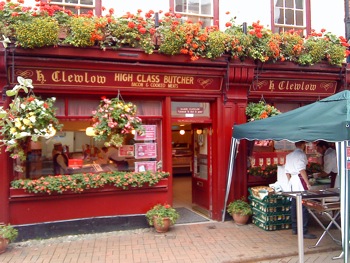 The magnificent frontage welcomes you in to see the vast array of fresh quality produce on offer.  The inside of the shop is light and airy.  Charles’ Father came up with the original recipe for their traditional pork sausages back in 1929 and the current variations are true to this base recipe. 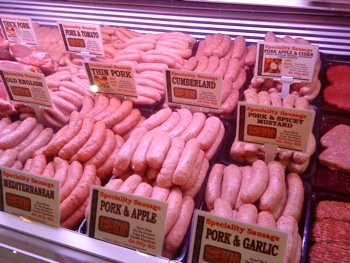 There are up to 30 different varieties available at a time and I can confirm that they are truly sensational sausages.  I recently tried the Pork & Garlic which were dangerously moorish with their meaty tangy flavour.  The Pork & Apple had proper chunks of apple in which made it really juicy and succulent and the smell and the taste of the cider perfectly complimented the meat.  You will be able to read my full review on www.sausagefans.com shortly.

Not only has Charles truly innovated with his sausages but the rest of his products are also imaginative.  You can buy, for example, pre-marinated chicken in portions for two people which just needs sticking in the oven.  At £2.65 per pack this is further proof that supporting your local butcher can be cheaper than buying from a supermarket.

They have also turned their hand to pie making and freshly produce a wide range including pork, steak and meat and potato.  All the pies are made on the premises so they can be 100% sure of the ingredients. 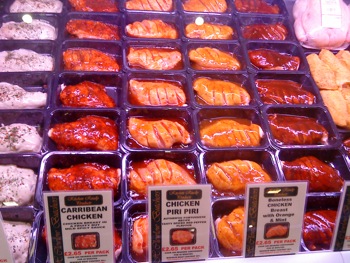 Clewlow’s butcher is a true family business spanning generations of the Clewlow family (Charles’ son now works in the business) and I think is an example of how it should be done.  In a climate of credit crunching people are turning to honest butchers like Charles to help them get the most for their money.

H Clewlow is on Pepper Street in Nantwich