The destination for my latest Sausage King Adventure was Gareth’s Butchers in Welywn. I first heard about Gareth’s Butchers via Twitter and then, based on recommendations, listed them on Sausagefans.com. From what people were saying about them I knew I had to visit them as soon as I got the chance.

I was counting down to Wednesday the 28th October and when the day finally came I took a leisurely ride down to Hertfordshire. As regular readers will know I have been taking the Sausage King Adventures back to their ethical roots and I am using a small engine motorbike (Honda CG125). This means that my route was planned to avoid motorways and the larger A-roads. However, I had to cut some of my meandering short on the way because I was getting really excited about meeting Gareth, Hannah and Tony.

The moment I walked into the shop I loved it. An Aladdin’s cave of exciting and tasty things is an understatement. 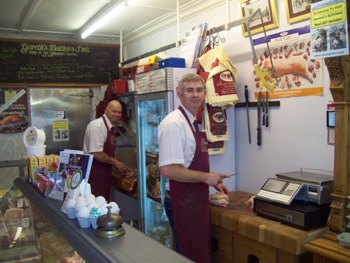 After having a cup of tea and getting warm from the ride, my first job was to try the Oakland sausage which is their signature sausage and the one people come from miles around to stock up on (as well as many of their other excellent flavours but more on those later). 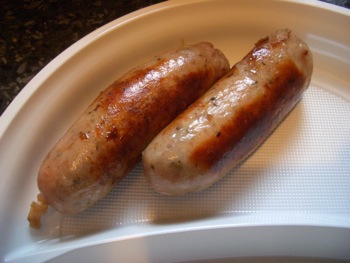 The Oakland sausage is one of the finest sausages I have ever tasted. It has a beautiful herb balance and a light and moorish consistency. I can see why people travel from so far around to buy this, and the other sausages, because it really is worth the journey. 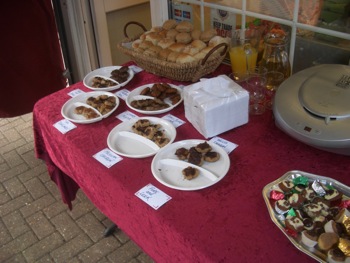 Hannah, who runs the deli part of the business, and makes many of the sausages, had organised some samples at the front of the shop and it was great to try out their range and also talk to their customers who are very enthusiastic. I felt bad that I didn’t have a rucksack with me or panniers on the bike as I would have happy bought enough sausages to fill my chest freezer! 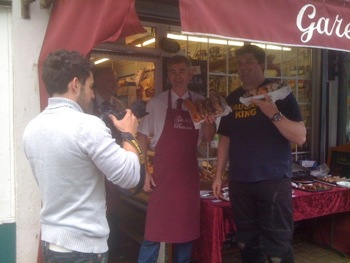 Here is a picture of Gareth and I posing with some sausages! We had a good chat with a reporter and posed for a variety of pictures.

I also posed behind their most excellent display of meat which in itself would be worth a visit in my view. 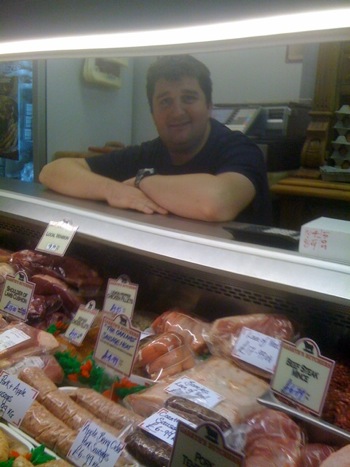 The fun continued when Tim Wheeler from BBC Three Counties Radio arrived with his radio car and he and I had a chat. He also had good chat with some of Gareth’s customers who are passionate supporters of Gareth. Then he tried his hand at making, and linking, his own sausages. 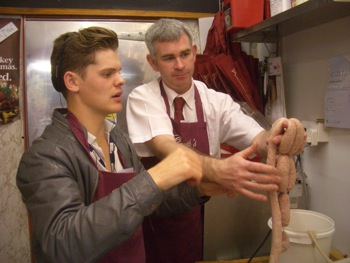 I thought Tim did very well considering it was his first time. As well as being an excellent butcher and sausage maker Gareth is also an excellent teacher and Tim was soon linking like a professional.

Although I was at Gareth’s Butchers for over four hours it felt like it was over far too quickly. I tried some incredible sausages including the oakland, curry mustard, pork and black Pudding, beef and chorizo, mexican chicken. They would have all provided credible opposition for the Champion of Champions competition I helped judge on Monday. 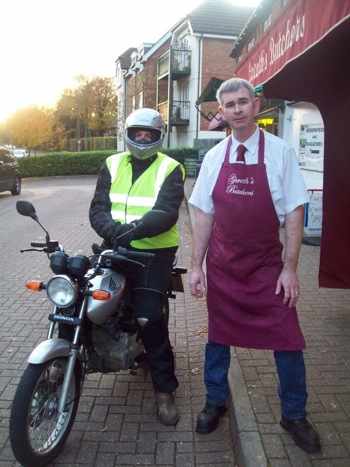 Whenever I visit a butchers shop like Gareth’s I’m inspired. Tony is a real gent and has an excellent banter with the customers, he is entertaining and personable as well as knowing his trade inside out. Gareth is modest, hardworking and highly professional. He has capitalised on his 23 years experience in the trade to provide his customers with a wonderful shop. Hannah is a real gem, she is from a long line of butchers and knows absolutely what the customers want. She also makes many of the sausages and ensures there is refreshing innovation in the recipes.

Between the three of them they provide a first rate service and it’s easy to see why people travel from so far to visit them.