Visit to de-lish in Wells-Next-the-Sea 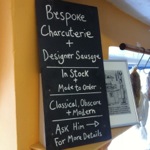 A number of people had recommended that I get out to Wells and visit de-lish. It was apparent from people’s comments that they were producing some very interesting and tasty products so naturally as soon as the opportunity to visit arose I jumped at the chance! Not only do they offer a bespoke charcuterie service but also a chance to have your own sausage designed!

I thought long and hard about what would be in my perfect sausage but it’s so hard I couldn’t even settle on what type of meat I would go for. Fortunately for me Jules, the owner and brains behind the gem on Staithe Street, had a cunning plan and a recipe for a sausage fit for a King!

I do have a very exciting new vehicle in mind that will allow me to get further around the UK on my Sausage King Adventures but for now I wanted to take a slow so I could see every gourmet treat that the Norfolk coast has to offer. So for this adventure it had to be the pushbike. I should be honest and say that I cheated as I didn’t feel quite ready for the 104 mile round trip so I also used the car!

As soon as I saw the shop and the blackboard hanging with the promise of merguez, garlic sausage and pate I knew I was in for a treat and when I stepped inside this was confirmed.

Jules, who BBC Goodfood said was “certainly a man to watch” was already hard at work when I arrived. Delicious magazine described him as the “Willy Wonka of sausages” and the moment I met him I could see what they meant.

Jules had, correctly, decided that I had tried many types of sausage and had invented his own take on the French champagne sausage. This slightly more credit crunch wise banger was going to contain pork, beef fillet, porcine mushrooms, cava and cracked black pepper. It was inspired!

We chatted while I marvelled at his produce and he told me about his “stouties” sausage and then he cracked on with making the sausage he called Mr Plume’s delight.

I knew I was in the presence of greatness and watching brilliance take place! 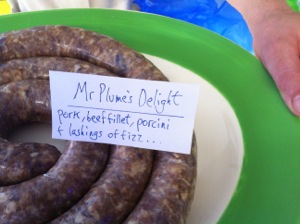 You have to love the creativity and, I have to say, you will love the taste. It got me thinking that the perfect gift for any sausage lover would be a few pounds of a sausage made specifically based on the things they like. Say it with sausages!

For me it was like being a child in a sweet shop. I didn’t really know where to start. On the sausage side of things there was a pork, lamb and a beef offering which included a garlic sausage and a merguez and, of course, the stouties as mentioned in the video.

The Mr Plume’s delight sausage was absolutely cracking and went on sale immediately. Another customer who bought some described it as being better than sex! Draw your own conclusions about that comment! 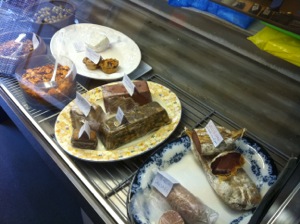 You can see the theme that is emerging!

This is a cracking shop which exclusively sells products made by Jules, the Willy Wonka of the sausage World. He is self taught and absolutely brilliant. How many shops are there where you can buy cooking sausages, ready to eat sausage, pate, olives and chocolate all made on the premises?

Pretty much the only thing I could see on offer not made on the premises was Bray’s Cottage Pork pies – but it’s hard to improve on those even for Jules!

de-lish, in Wells-Next-the-Sea makes some of the nicest sausages I have ever tasted. Not only that but he runs an honest and ethical business buying his meat and ingredients as locally as possible. He is a skilled craftsman and breaking new ground in the World of sausages.

If you needed an excuse to visit the lovely seaside town of Wells de-lish is that excuse.