Village’s bangers and beer festival went down a treat 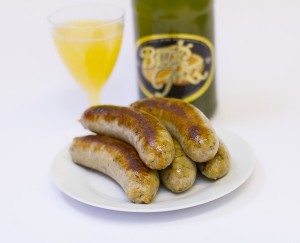 Between 3,000 and 4,000 people descended on Whittingham Sports and Social Club, the venue for the village’s annual Beer and Sausage Festival.

The club teamed up with Preston North Rotary Club to stage the second such joint festival over the bank holiday weekend.

Rotary spokesperson Jack Giddins said: “It was an absolute storming weekend. It was absolutely raving, brilliant,phenomenal.”

He said that a big contingent from Goosnargh and Whittingham had attended and the feedback from local people was that it had been a super event, helping to bring the community together.

He said, however, that other people had travelled from “far and wide” to be there, some coming from as far away as Manchester.

He said: “It is putting Goosnargh on the map. We had five live bands over the three days.

“On the Friday The Heat absolutely blew the roof down and on the Sunday afternoon we had The Rockits, who are local to the area and are resident at the Cavern Club.

“The club was packed. They were brilliant, playing their 60s stuff, and when the band Off the Rails played there wasn’t a person left not dancing. It was absolutely storming.”

He said there had been an incredible turnout; the beer was all sold and extra deliveries had to be brought in.

Between 3,000 and 4,000 different flavoured sausages made by Reg Johnson, from Goosnargh, had been sold and the ladies cooking them could not have worked any faster.

Also, there had been plenty of staff behind the bars and everyone bought tokens for beer, so no money had to be passed over the counter.

He said: “People have been quite taken aback. We had a good do last year, but then we did a third of what we did this year. The difficulty next year will be matching it!”

“Yes,we will have to run it again. But we couldn’t do it without Whittingham Club. Their management of the beer and providing the venue is fantastic,” he said.

“They have put a lot of work into it. It was first class and very much a community thing. The atmosphere was incredible and there wasn’t one scrap of trouble. It was really good and upbeat.”

Rotary coffers, he said, had been given a boost to help local good causes, further news of which is to follow once the accounts are totted up.