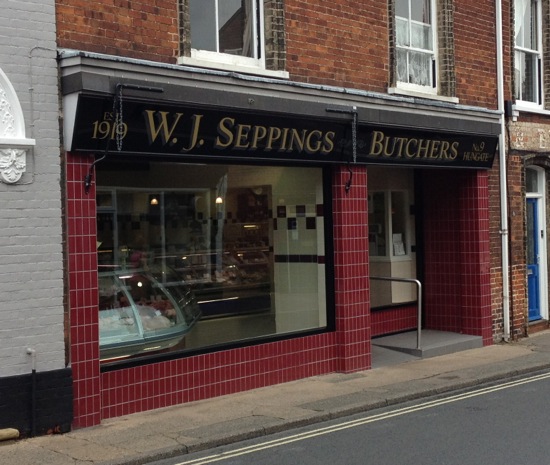 The rain clouds circled threateningly as I arrive in Beccles but nothing could dampen my spirits.

People rave about the butchers in Beccles although opinion is split as to which is the best.  This is often the case in market towns.

Talking to people as I strolled round was fascinating.  The passion people have towards sausages never ceases to amaze me!

Beccles, a fairtrade town, has a moto of “Prosperity through Fidelity”.  I certainly got a sense of loyalty when talking to some locals about the best sausages in the town.

First up I visited Chambers.

Chambers seemed to be doing a good trade with customers coming and going.  A pound of sausages was £2.85.

Seppings was up next, probably the best known butcher in Beccles, at least the one amongst the people I know.

An impressive looking shop (they have another branch in the town too).  They have a nice system whereby the butcher doesn’t handle your money.  He sorts out your order and then passes you the meat and a number which you take to another desk to pay.  Here a pound of sausages was £2.82.

After a nice stroll around I arrived at my final stop.  Bob Knights.

Here the pedigree of the pork was proudly on display with a sign saying they sold Blythburgh free range pork.  Here a pound of sausages was around £3.28.

So to the best part, the tasting. To aid me in my task I roped in my wife and the two Sausage Princes.  A true gender and age cross-section!

As usual I went for grilling for those all round crispy skins I’m such a fan of.  In each case we sampled the sausage first without relish or accompaniments.  Straight to the flavour!

On first impressions all of the sausages cooked up beautifully.  The smells filling my kitchen were immense!

Normally this is where the process gets simple.  We typically find one sausage we all don’t really like.  Of the remaining two varieties we normally end up having a discussion, some more tasting and then we reach agreement.

Not so with Beccle’s finest!

Luckily we put half of the sausages from each of the butchers in the freezer so at some point soon we will revisit these again and try and come up with the winner.

I would love to know your views on the sausages of Beccles.