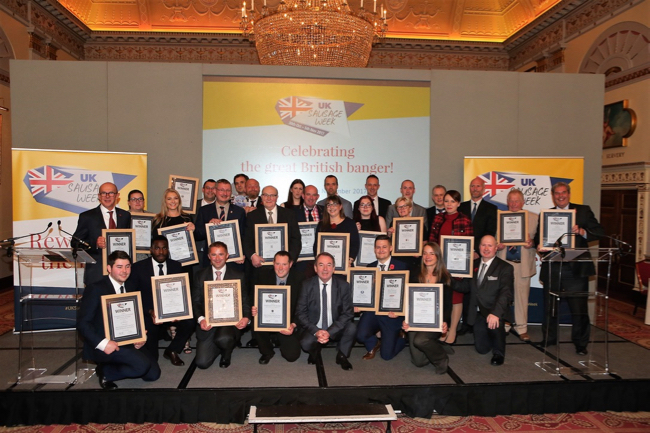 A total of 27 best banger accolades were handed out , and The UK Supreme Sausage Champion title went to Kent butchers JC Rook & Sons Ltd for its Battle of Britain Memorial Sausage.

Co-op won the Retailer: Traditional category with its Butcher’s Choice Cumberland Sausage and Waitrose was a clear winner in the Retailer:Innovative section.

Other independent retail butchers up and down the country won in respective regional categories and in Foodservice, Traditional and Innovative winners were Campbells Prime Ltd and Solent Butchers Ltd respectively.

A full list of results can be found below.

Eric said he was delighted to be involved with UK Sausage Week . He commented: “People often say to me , ‘I don’t know much about art but I know what I like!’ The same could be said about me and sausages. I wouldn’t claim to be a sausage expert but I certainly know a good one when I’m eating it.”

The search to find the best UK sausages set off with sizzling success when over 400 different bangers arrived at The Regional Food Academy at Harper Adams University for two days of judging in the run up to UK Sausage Week.

The sausages were assessed in their raw state and cooked by professional home economists, according to the maker’s instructions. They were then judged by some of the UK’s most experienced experts, including Ladies in Pigs , all under the wa tchful eye of head judge and UK Sausage Week’s supremo ‘Sausageologist’ Keith Fisher.