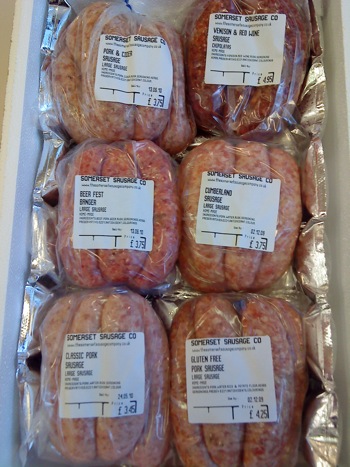 Ever since I heard about The Somerset Sausage Company I had been waiting hungrily for the chance to try out these exciting sausages.

First off let me mention the packaging.  Regular readers will know that I don’t normally go down the packaging route unless it’s recyclable.  However I don’t think I have ever received mail order sausages so well packaged.  The ice pack and insulted box had kept these meaty treats at a perfect temperature and they were all sitting as you see in the picture ready for inspection.

To be honest they all looked so good it was hard to know where to start.

We thought that it would be best to kick off with Classic Pork.  I always think that the classic pork tells a great deal about the sausage maker.

Unfortunately I couldn’t resist the beer fest bangers too.  They smelt divine and almost like you could drink them.  This sounds very odd even for me but it was just like a pint of best bitter.  As you can imagine time passed slowly while they cooked!

My wife, who was doing the cooking, had some initial comments about the lack of shrinkage and the sausages well packed, dense nature.  Personally I was biting at the bit to get tucked in to these Somerset treats.

The only way I could improve the situation while the sausages were cooking was to try and take my mind off them.  This was hard because a beautiful smell was gradually filling the Sausage Palace.  In the end I had to crack open some champagne because I had a feeling these sausages would be worth celebrating.

I love to try a sausage maker’s pork original because I figure that if he can’t make a decent pork banger then what hope is there with the pelican, foie gra and lemon grass sausage!  These sausages did not disappoint.  They were really well flavoured and porkie but nothing about them was over powering.  The uncluttered flavour would lend itself to anytime of day.  I would have been happy to see these popping up with my bacon and eggs.  Equally I know the left overs will be a treat in a sandwich tomorrow.

Having already enjoyed the original pork the pressure was on to see if The Somerset Sausage Company could deliver on something a bit more sophisticated.  These sausages had smelt amazing (and I do mean AMAZING) while cooking and even raw.  I’m not prone to a bit of raw sausage munching but these bad boys smelt like a great pint when raw and were almost drinkable (I know how weird that sounds but hopefully you know what I mean).  When cooking you got a bit more of the good news from the whole grain mustard.  When cooked they were pretty much the epitome of proper winter warming comfort foot.  The mustard balancing with the flavoursome pork and beer perfectly.

I am also going to have a Sausage King Adventure down to meet these guys in person.  If I can persuade them I am going to try my hand at making their cracking sausages too!