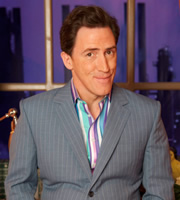 On the 14th of August (next Tuesday) a brand new series of the Rob Brydon Chat Show starts on BBC 2 at 10pm.

Rob talks to comedian Michael McIntyre about being a dad, meeting Prince Charles and going back on tour. Blur’s Alex James shares his secret passion for meteorites, and Amy MacDonald performs before revealing an unlikely musical inspiration.

Plus, Rob meets the studio audience, who have some unexpected stories of their own.

Somehow talking about The Sausage King Adventures didn’t make the cut! Gutted! The guy who was struck by lightening and bitten by a shark stole my spot!

If you enjoyed watching the show I hope you will enjoy watching the video below. Some 15 year old students I work with made a comedy pilot of how an episode of The Sausage King Adventures could look!