The hunt for ham – The FruitPig Company

As we get nearer to Christmas as well as hunting for the perfect sausages I have widened my search to include the perfect ham. On Christmas day sausages will be part of the evening menu wrapped in streaky bacon but the ham will be the centre attraction.

On Monday my search took me to Wisbech which is a market town in Norfolk and home to The FruitPig Company. I knew when I first met Matt Cockin of The FruitPig Company he was going to change the world of meat. So far he hasn’t let me down and I’ve had several opportunities to try his products including Norwich Battle of the Bangers and at The Dabbling Duck at Massingham.  I figured that if his bacon was anything to go by his ham would be worthy of centre spot on my table.

The FruitPig Company prepares and delivers rare breed, pedigree, free range pork to some of the finest eateries and deli’s in Norfolk.  Despite the snow and very low temperatures I braved the roads to make the trip to their HQ.

As it is the school holidays Matt has roped in his rugby star (England squad potential) son, Ben to help with the Christmas rush. I was really grateful to them for allowing me to visit in their busiest period.  As ever Matt’s passion is infectious and you can’t help but get involved as he talks around joints and things they are working on. 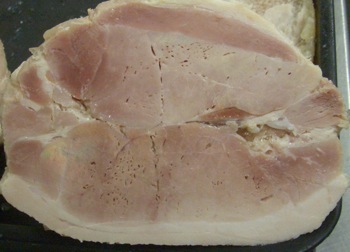 And then, as if the visit wasn’t already a lot of fun we cracked open the ham and tried it.  Wow.  The flavour is amazing.  I can say *is* because unlike some of the other bits I bought back from The FruitPig Company I have managed, so far, to resist sampling more of the ham.

I haven’t however, managed to resist the (unrolled) pancetta which is absolutely first rate. 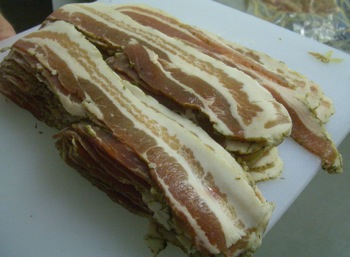 In his (relatively) short time in butchery Matt seems to have picked up an in-exhaustible amount of knowledge about what might work with what cut of meat and his pancetta, unsurprisingly, is already a hit with many chefs around the UK.  His black pudding (which I have also been powerless to resist) is also excellent.

As soon as I get change in the new year I will be back off to see Matt and The FruitPig Company to get involved in making some of his magical sausages.