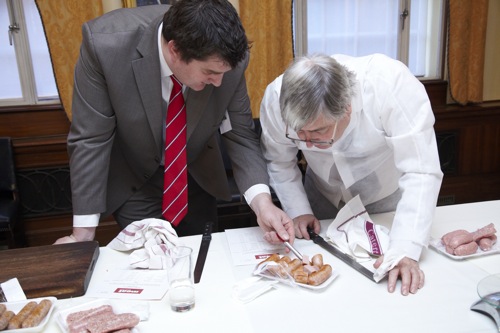 For a high-street butcher to be able to say with official backing that he makes the Best Banger in Britain must be some kind of carnivorous Holy Grail. The honour would make him a true Sovereign of Sausages!

Well, that is exactly what a Somerset butcher can now call himself after this week being named as the maker of the UK’s Champion of Champion Sausages.

Westcountry meat-lovers can bow in abeyance to Wellington’s Chris Potter, who not only is now recognised as creator of the best banger in Britain, but who successfully broke the traditional mould by reigning supreme with a flavoured sausage rather than a plain one.

And Chris must be a shrewd businessman because his creation has been described as “Christmas in a sausage” – which will undoubtedly be a selling point in the weeks to come.

The winner of the Meat Trade Journal’s annual banger competition consists of pork, turkey and cranberries.

Journal adviser Fred A’Court was one of four judges in what is known to be Britain’s most prestigious sausage competition, and he admitted that traditional pork sausages usually came out as the ultimate winners.

“I am delighted that a pork, turkey and cranberry sausage has won this year, because it’s just that little bit different, and it’s perfect timing for this competition as it’s coming up to Christmas,” commented Mr A’Court, adding that if Potters of Wellington played their cards right they could “quadruple sales of sausages this year.”

Mr A’Court explained that judges had been looking for a high level of consistency at every level. This included consistencies in size, a consistent sausage mix with an even distribution of ingredients, and consistent and even cooking.

“We’re looking for a nice golden brown colour,” he said. “Obviously the taste is very important. If you can get a taste that’s distinctive and a bit different, then so much the better.”

The sausage’s creator, Chris Potter, runs the family butcher business with his father Tim – who was beaming with pride this week as the handsome Champion of Champions Cup was placed in the shop window.

Chris told the Western Morning News: “I took a bit of a gamble and thought we’d try and do something different with the sausages – and it paid off. We’ve made this recipe for the last three or four years now, but this time we took the gamble and put it into the Winter Fair at Sedgemoor Market last year and won. It was that which allowed us to go on to the national championships.

“It’s 50 per cent pork, 50 per cent turkey,” said Chris of the best banger. “So it is quite healthy really because the turkey is very lean and there’s not much fat in the overall sausage at all.

“Now all I’ve got to do is dream up an idea for something so we can enter next year’s competition,” said the UK’s Sovereign of Sausages, adding: “This is a dream for me because I absolutely love entering competitions.

“I’ve won things with sausages before, but never anything to this extent, so I can’t really explain just how happy I am.”