Sausages for the Olympics 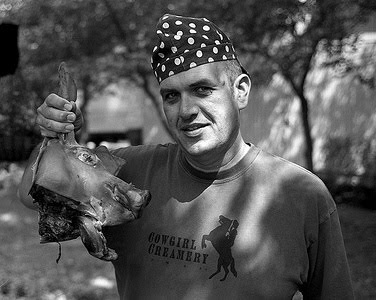 SK: As regular readers will know I’ve been on the search for sausages with an olympic theme.  Someone I follow on twitter, who I can only describe as a culinary wizard, has done his best to recreate some awesome British sausages for the Olympic opening celebrations in America.

Andrew Conaway is a blogger who runs the entertaining and informative website, Saucisson MAC.  In his words if you are what you eat he should be a giant sausage!

Andrew learned to cook from his parents and his grandparents, and he is lucky to been surrounded by friends who have been interested in preparing good food.  He started his blog to try to communicate that you don’t need big kitchen of fancy gadgetry to produce fine food. He has tried to bring a bit of history into what he makes. But most importantly he has tried to show how food should bring together friends and family.

Hear from him below about his brilliant post about his creations: In America if you say Banger or Chipolata, you’re considered a British sausage expert. So when I read a tweet from Britain’s leading sausage expert about about some folks selling snorker snacks in East Anglia, I put on my sausage detective hat to find out more about these little lovelies. The Olympics and the Industrial Revolution.

Last weekend’s Opening Ceremonies for the summer games had a narrative of the advent of the industrial revolution that started in the UK and spread around the world. This age of mechanization was not limited to steam engines and sweaters, it also included food. And of course one of the easiest foods to put on the production line was sausage. While industrialized food has given rise to miracles like Modernist Cuisine, and imporved many foods that I love such as mustard, beer and Parma ham, the change in how food is processed and distributed has also caused some folks to stare at their plates and ask, what is real? This is especially true when it come to sauasges.

In the UK sausages aquired a reputation of being tasteless links stuffed with so many cereal fillers and water that they exploded upon cooking, hence the term bangers. American sausage maker Bruce Aidells wrote that it was the horrible sausages he had while living in Britain that inspired him to start making his own.

But as with all generalizations, this one doesn’t capture the whole story. Before and after the Industrial Revolution small producers made quality sausages to little fanfare. And over the past few years seeking out these regional specialties has become a new pastime for many.

Great Britain a country of sausages.

Stephen Plume AKA the Sausage King, is one such person. Through his website SausageFans UK, the Sausage King documents his trips around Britain in search of the finest sausages. According to the King, there are over 500 different types of sausages in the UK. And indeed there are many unique sausages in the British Isles. Last November I wrote about the Cambridge sausage in honor of British Sausage Week. In that post I also noted the the Cumberland sausage had gained a PGI (Protected Geographical Indication). In May the King reported that another sausage The Lincolnshire, had failed to gain protected status. One of the reasons giving was that there were to many versions of the recipe. Boosters of an East Anglia banger hope to avoid the fate that befell the Lincolnshire. In the town of Newmarket two rival butchers have agreed to a truce in an effort to gain PGI status for their unique link, The Newmarket Sausage. Sausage makers Powters and Musk’s each claim to have made and continue to make the original Newmarket Sausage since the 1880’s. Since I live nowhere near Newmarket, I can’t say which purveyor makes the better link, let alone, who made the original. However I did find a PDF of the Newmarket PGI application, so I can try making my own. Yeah but why? In a word, Snorkers.

Recently one of the Sausage King’s tweets led me to the website of Big Skies Food Company. The organization does one of the most important services known to humanity, encasing meat in pastry. Among the products they offer is a Snorker Snack. Snorker, I soon read, is a slang term for sausage, maybe refering to its likness to a snorkel.Wikipedia reports that it may have originated in the Royal Navy. After an exhaustive ten minute search of the Internet I concluded that snorker reference is valid and Big Skies is the first and only going concern that sells a Snorker Snack. I should mention that this toodoo unfolded because I was looking for a British themed nosh to take to an Opening Ceremonies potluck. Well I didn’t dare try to crack the proprietary formula of the Big Skies snorker, so I looked for another sausage of the region. That’s when the Newmarket Link dropped in my lap.

Cut the pork into cubes and toss with the salt, refrigerate as time allows, 2 – 24 hours. Grind through coarse plate. Using the paddle attachment or a big wooden spoon beat in spices then herbs and bread crumbs. Add the liquid as needed to keep the mixture going. Continue to mix until uniform, about a minute. Stuff into hog casings. Now would someone from East Anglia spot this banger as a Newmarket? Probably not, But I did conform to the PGI description, except for the part about making it near town.

The PGI (find link above) states the sausage must be coarse ground, no smaller than a 3mm plate. The sausage may contain only the following ingredients:

Bread, rusks and water may make up no more than 30% of the product.

I think I nailed it.

For the Snorker Snack I found this lovely shortcrust recipe in the Guardian. It calls for mustard powder, I used ground brown mustard seeds. Pork crackings are the topping on the Big Skies Snorker Snack, I was fresh out so I substituted sumac. A the party I served the snacks with a coriander chutney, but with the leftover bangers I grilled them and ran them through the garden, American style.