Sausages are bang on with contest judges 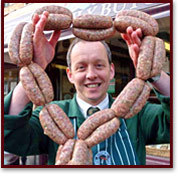 Rothbury Family Butchers, at Townfoot, Rothbury, and its branch at Heighley Gate Garden Centre each entered eight types of sausages into this year’s BPEX Foodservice Pork Sausage of the Year competition.

The Rothbury shop collected four golds, four silvers and a bronze with the Heighley Gate branch picking up three golds for pork, Stilton and damson chutney, pork and chip shop curry and The Mojito Sausage (pork, lime and mint ) and five silvers.

Rothbury’s Three Kings sausage, made of pork, chestnut, orange and cranberry, won gold in the Best Innovative Pork Sausage category and went on to be chosen as one of 15 finalists to go forward to the grand final and battle it out for the highly-contested Overall Champion title.

He has gone through the ranks at the Rothbury shop, starting as a Saturday lad and then serving his apprenticeship.

He was overwelmed by his success.

He said: “To pick up awards for every sausage entered from both shops is amazing but to get seven golds is even better as they are only awarded for sausages scoring 95 per cent or above.

“But the icing on the cake for us was that our Three Kings sausage has made it to the final and is now officially in the top three in the country.”

The Three Kings is now in the running to be crowned Foodservice Sausage of the Year Champion 2014.

The winners will be announced at Butchers’ Hall in London on Friday, October 31, ahead of British Sausage Week.

“He’s come a long way since he walked in a shy lad on work experience, he really deserves the recognition.

“I’m looking forward to taking him down to London for the final.”