Sausage-making is more than just a ‘good game’ 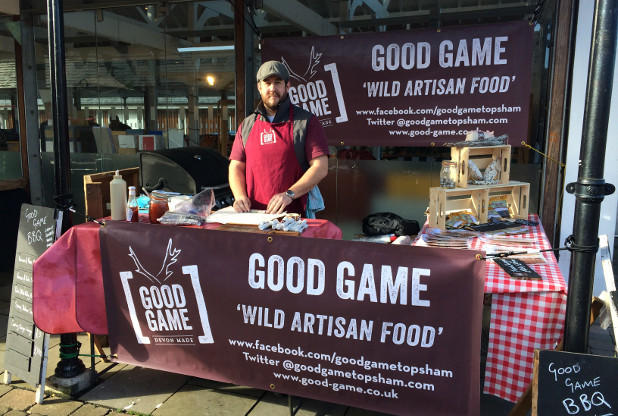 Taste was launched in the Pannier Market in Tiverton in February and since then it has seen a new stall added almost every week.

The latest edition to the diverse mix is Good Game, which sells artisan cured meats and hot fresh sausages and burgers, produced from their unit in Topsham.

Pete Woodham-Kay, 36, and Steve Williams, 40, set up the company

a year ago after driving from Devon to Casablanca in a Cavalier worth just £100.

“We were driving through France and looking at how much great produce is hanging up over counters and thought how good it was,” said Pete.

“It went on the back burner for a few years and then we began to dabble in it for our own benefit, making sausages and things. We’d make a batch and take them to social events and family members would ask us where they could buy

them and we’d say, ‘well, you can’t’. That was when we decided to take the plunge.”

The pair, who are both originally from south Wales, met at a pub in Devon.

“Two Welshmen in an English pub – you gravitate towards similar people with similar ideas about what you like and what you don’t like. We both have different skill sets which benefits us,” he added.

Pete, who was a student at Plymouth University, went on to work as a skipper on boats all around the country. Steve works in recruitment and still manages a 9-5 job as well as running the business

Pete said: “We start at 6am and finish at 9pm. A typical day will be to get up and go to the unit, which we call the ‘Rabbitoir’, and pack for market. One day we made two batches of chorizo and fresh sausages for the next day. Then I drove to Tiverton and Steve went to his job. We’ll meet up again at 5.30pm and make two batches of salami and more sausages. And then at 8.30pm we have an important ‘board meeting’ in the pub.”

They aim to support local producers and source their meat and game from Devon farmers and gamekeepers. When they have time they use their own boat to catch fresh fish.

Everything is made by hand and cured using only salt and Exe estuary air.

“We’ve been really well received in Tiverton so far – it’s a great town with a real history of the market. It’s about changing people’s habits instead of bringing a packed lunch.”