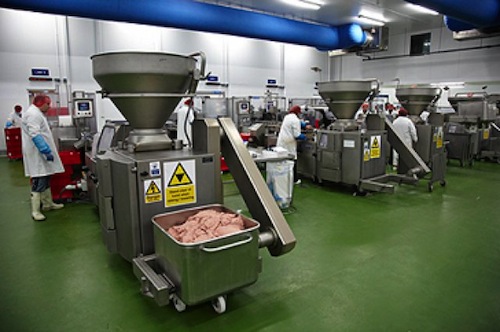 Would you fancy running your own sausage factory?  I know I would!  This could be your chance:

Potential buyers of a closure-threatened meat producing plant are being sought while talks continue with the current owners, Finance Secretary John Swinney has said.

Vion Food UK is consulting on the future of its Hall’s of Broxburn factory in West Lothian, putting about 1,700 jobs at risk.

Mr Swinney said: “The Government can’t acquire companies like this, this is a private company, but what the Government can do is engage in dialogue with a range of parties that would have an interest in the plant.

“Clearly, Scottish Development International and Scottish Enterprise are pursuing that discussion in the market place with the objective of encouraging different players who could run this plant profitably and successfully.”

Mr Swinney convened the second “taskforce” meeting in Broxburn to take stock of developments almost one month since the owners announced a 90-day consultation.

The factory employs 1,150 permanent and 595 agency staff. It is a major processing plant for Scottish pork used to make sausages and other meat products, handling about 8,000 pigs each week.

The factory is said to be losing about £79,000 a day, despite heavy investment.

Mr Swinney said some of the loss can be attributed to production which is not as profitable as was expected.

“A large part of the losses have been tied up with the importing into the plant of a particular sausage production operation which was profit making when it came here but is not profit making while it’s here,” he said.

In a statement, Alasdair Cox, director of corporate affairs at Vion, said employees are being given weekly updates.