The people behind Rate My Sausage are now looking at supermarket sausages.  What an excellent idea.  Visiting your local butcher might not always be practical so it’s excellent to know what else is on offer.  In this review they look at Sainsbury’s Taste The Difference range and try the pork and caramelised red onion sausages. 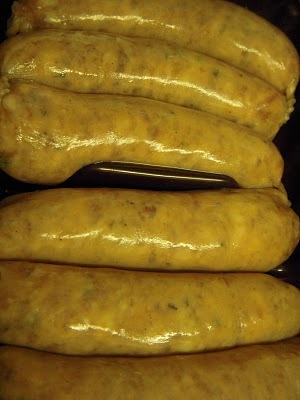 I’ve chosen their “Taste The Difference British Pork & Caramelised Red Onion Sausage” as the first offering from the retail sector of the banger world. This is part of their premium product range, comparable to Tesco’s “Finest” or Morrison‘s “The Best”. The Sainsbury’s website tells us that all the meat in their sausages is produced in the UK, “including back fat (we are the only company that does this)”. 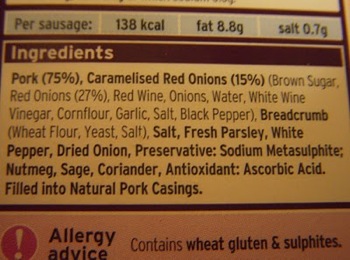 Anyway, back to the bangers! These six Sainsbury’s sausages were joined as one link within the pack, with a good long piece of casing in between each one – this was a really good idea and made cutting them apart before they went in the pan very easy.
Meat Content:
The label says 75% pork. It’s the first pre-packed test, so it will prove to be a useful benchmark for others – if 75% pork tastes bland here, then god help those with less! So…..how did it go down? Well, actually pretty good! This cut and tasted like a meaty banger, albeit not as high-rating as the previous two. It needed a chew, which is surely a good sign, and was juicy and tender. Nice!
Flavour:
The flavour was onion-ey, as you’d hope, but the sausage was a meaty, satisfying one. Slightly spicy, huge on the onions (avoid if you don’t like ‘em). This sausage didn’t match up to the butcher made bangers, but did give it a damn good try. I hope other retail sector sausages rate as highly!
Texture:
All six sausages were exactly the same size and shape – will this be commonplace for the retail sector bangers? I think that when your sausages vary in length, thickness, and especially shape, it adds to the whole eating experience. I prefer idiosyncratic sausages, not “robotages” ™. Stood up manfully to the six slice test. 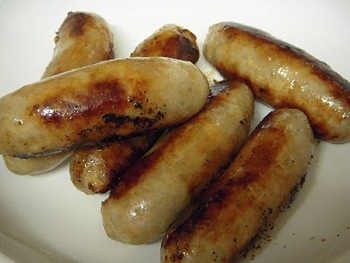 Shrinkage:
Average weight uncooked – 66g
Average weight cooked – 45g
Shrinkage – 32%
The biggest shrinker so far, but the opposition’s been very tough.
Value For Money:
These sausages come in a pack of six weighing 400g, at a cost of £2.59 – this works out as a price of £6.50 per kg, or 43p per snorker. 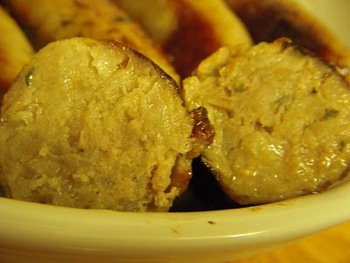 Dribble Factor: These sausages smelled fantastic while they were cooking, I could almost taste the onion flavours, and the cooking time seemed an eternity. If you’re looking for sausages that really boost your appetite before you eat them, these are highly recommended.