Unique sausage celebrating ‘the best of the West Country’ set to be produced for The Royal Bath & West Show, 1 – 4 June 2011

A unique sausage creation entitled ‘The Beast’ – a West Country pork sausage featuring Devon farmhouse cheddar, sweet caramelised onions and smooth Dark Bath Stout, which was created by a food lover from Devon – has won a national competition to go into production in celebration of the Bath & West Show in June.

After being put to the taste test by an esteemed judging panel including some of the region’s leading foodies, ‘The Beast’ beat off competition from over 300 innovative entries to the ‘Bath & West banger’, a competition that gave the public the chance to create a limited edition sausage flavour for this year’s Bath & West Show, which they felt best encapsulated the strong food and drink heritage of the West Country.

Award-winning West Country sausage manufacturer Westaways, who are now developing and producing The Beast sausage, are using ingredients from some of the region’s most celebrated food producers in the winning recipe, including prime cuts of pork from Farm Assured West Country Farms, Extra Mature Farmhouse Cheddar from renowned Devon cheese makes Quickes and an impressively smooth Dark Side Stout from one of the region’s leading independent Brewers and Publicans, Bath Ales.

‘The Beast’ will be available to buy from 1st May from selected retailers including many participating Spar, Londis and Costcutters* throughout Cornwall, Devon, Dorset, Somerset, Wiltshire, Hampshire, Gloucestershire and parts of South Wales. It will also be available to buy at the Royal Bath & West Show in June. 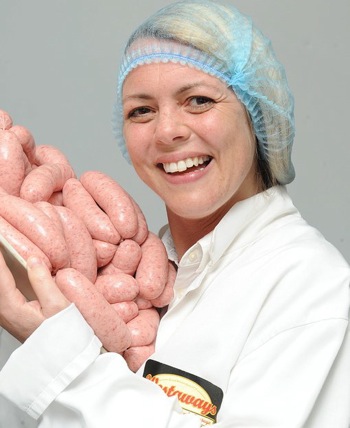 Cath Burley from Woodbury in Devon, who created ‘The Beast’ flavour, says ‘I am thrilled that my sausage has been chosen to be the Bath and West banger. I’ve always loved food and am a big fan of local produce from the South-West. I am excited about The Beast going into production and can’t wait to see it at the Bath & West Show this June!”

Bath & West Show Manager and competition judge, Alan Lyons says: “Thousands of food lovers descend on our show each year to taste produce from the West Country and beyond, visit the National Cheese Awards or experience the UK’s biggest cider competition. The response to the Bath & West banger competition has been fantastic and sausage-lovers at this year’s show will be in for a real treat with the Beast.”

John Sheaves, Chief Executive of Taste of the West and fellow competition judge added, “I was really impressed by the many innovative ideas the public came up with, which demonstrated the passion people have about the food and drink heritage of the West Country. The Beast is a well-deserved winner and not only tastes delicious, but truly illustrates the wealth of regional ingredients available in the South West.”

Charles Baughan, owner and Managing Director of Westaways, says “A legendary show deserves a legendary sausage and I am therefore delighted to be producing this recipe that not only tastes fantastic but encapsulates the full diversity of this wonderful part of England.”

The Royal Bath & West Show will be held between Wednesday 1 and Saturday 4 June 2011 at the Showground, Shepton Mallet. Advance tickets are available to buy now.
For tickets and show information visit www.bathandwest.com.