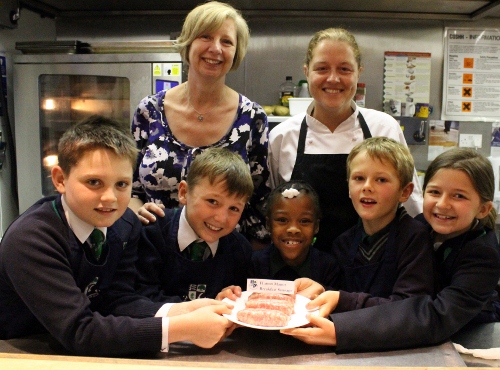 The pupils at Woodlands School, Hutton Manor are celebrating today after winning the ‘Schools Sausage Competition’ in association with Waitrose and Musk’s. The School has won £1000 in prize money and their sausage will be produced and sold on Waitrose deli counters across East Anglia from 27th June 2012. The Schools ‘Sausage Club’ entered the competition never dreaming of winning but six out of the seven judges on the panel voted that the Hutton Manor Breakfast Sausage was the best in the competition.

There are many after school clubs at Hutton Manor and when, for the first time ever, the school launched a ‘Sausage Club’ in January seven interested children signed up. The club ran for three months (one school term) and each week the children learned about where sausage ingredients come from, different flavours, herbs and spices and how to make sausages. The children visited the local ‘Oliver’s Butchers’ in Hutton to learn about how much rusk to include in a sausage recipe and speak to a butcher first-hand.

The children taste tested many different flavours to see what they liked best and then spent weeks perfecting their winning recipe. They made many types of sausages from vegetarian, lentil, mushroom, sage and chive to more exotic flavours such as chilli and chocolate, and pumpkin and pork until they finalised their ‘Hutton Manor Breakfast Sausage’ recipe. The ingredients include; mushroom, tomato, smoky bacon and Worcestershire sauce, everything that a British breakfast should include!

The children cleverly conducted research to gain feedback from other pupils. They served the sausages that they made as part of the lunch menu and quizzed their fellow classmates on what they liked best.

There were seven judges on the panel including; Chris Sheen (Director of Musk’s), Jamie Matthewson (Fresh food meat buyer for Waitrose) and five other directors at Waitrose. It was nearly unanimous that Hutton Manor’s recipe was the winner.

Mrs. Paula Hobbs, Head Teacher at Hutton Manor commented; “The children and staff were ecstatic when we heard the news. When I first saw the competition I thought it was a great opportunity to try something completely different and the enthusiasm of the children and staff ensured that the whole project was a total success. We intend holding a celebratory sausage breakfast for everyone at the school – Hutton Manor Breakfast Sausages will be served, of course!”
The £1000 prize money will be spent equally on the School’s Cookery Club and Gardening Club. Every thing the Gardening Club harvests is used on the School menu and within the Cookery Club