Pig and Co’s first year has been a banger! 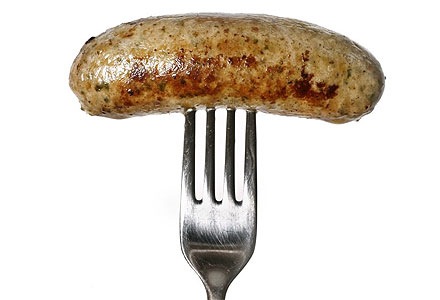 A GOOSTREY sausage maker is celebrating after topping the class in three categories in a prestigious food awards.

Pig & Co, the artisan producer of free range, rare breed sausages from their own herd of Gloucester Old Spot and Saddleback pigs in the village has scooped three gold stars in different categories in the Great Taste 2013 awards.

The sausages impressed more than 400 judges after thousands of hours of blind tasting, with the gold star standard defined by the Guild of Fine Food as ‘a virtually faultless food’.

Judges were presented with, for example, a piece of sausage, with no wrappings, jars or marks – and they taste, confer and re-taste before making the decision on whether a product should be a winner.

In total more than 12 judges will have tasted and commented on each product.

Julian Price, owner of Pig & Co, said: “We entered four types of sausage from our gourmet range of over 20 flavours and for three of them to get a star is simply fantastic. We’re only just over one year old and have now won several national awards – it’s amazing.”

Pig & Co also won the prestigious national FreeFrom awards earlier in the year for the best gluten-free sausage in the UK – beating Salisbury’s Taste the Difference, The Good Little Pig Company and the CO-OP.