AN award-winning Nantwich farm butchery has undertaken its first ‘royal’ commission – a birthday surprise fit for a king. 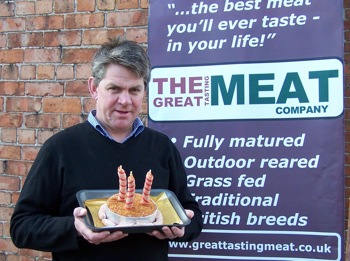 Only a fortnight after hitting the headlines with its heart-shaped Valentine steaks, the Great Tasting Meat Company has produced a birthday cake decorated with sausages instead of candles.

The sausage-meat confection was made as a surprise birthday treat for Britain’s proclaimed Sausage King Stephen Plume, who has just celebrated his 31st birthday.

Stephen, a school teacher in Norfolk, spends much of his spare time touring the country on his motorbike taste-testing artisan sausages – earning himself the reputation as the Sausage King.

“We invited him to come up to our farm shop on his birthday to sample our prize-winning sausages but his school commitments just made it impossible,” said farm shop owner, farmer Andrew Jackson.

“So we got our heads together and decided the only answer was to make a sausage cake and send it down to him as a surprise.

“The cake base is made from our finest grass-fed free range rare breed pigs and the candles are our special cracked black pepper pork sausages.”

Over the years the Great Tasting Meat Company has won many top awards including the supreme national champion title for the best beef burgers in Britain at the butchery trade shown at the NEC, Birmingham.

“We have produced several superb and original varieties of award-winning sausages but this is the first time we have ever used them to decorate a birthday cake,” said Andrew.

The Gate Farm Shop in Wettenhall Road, Poole, near Nantwich is open from Tuesday to Saturday, 9am-6pm.

Full story from the Crewe Chronicle.