My new sausage tasting job is bang on 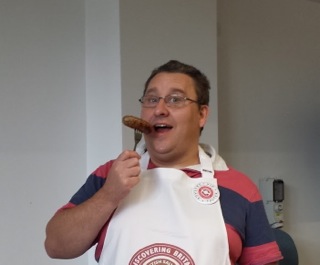 WE are not telling porkies – a man from Bicester won a nationwide competition to find a sausage taster.

Jason Ayres, a stay-at-home dad, writer and DJ, beat 250 people across the country to be picked to eat dozens of sausages for British Sausage Week 2013.

The national sausage competition saw him join 20 industry professionals to help munch through 300 types of sausages in Telford, Shropshire.

And despite the glut of pork products he has had to eat, he still remains a fan of the good old British banger.

The 43-year-old said: “I really love sausages, to the extent that my friends constantly joke about it.

“My best man at my wedding even included it in his speech.

“I’ll always be the first one to get the sausages after a football match or a game of Aunt Sally.”

He was picked to taste test after writing an application to the sausage competition organisers Love Pork in which he spelt out how much he loved the meat. After being chosen, his judging helped to pick out the best bangers in the UK.

Some of the flavours included in his munchathon were cranberry, apple and Stilton, and Mr Ayres believes he tasted more than 30 varieties. And their creators will now pick up gongs during British Sausage Week in November.