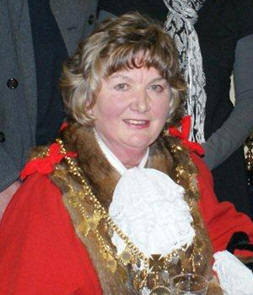 The Mayor of Louth who greeted the Olympic Torch in a sausage costume that ‘looked like a penis’ will open this year’s Lincolnshire Sausage Festival.

Councillor Jill Makinson-Sanders, 61, wore an 8ft tall pink costume to promote the Lincolnshire sausage on a national stage during the Olympic Torch relay in June.

She is now set to appear as the ‘Sausage Lady of Louth’ at the BIG Tastes of Lincolnshire Sausage Festival at Lincoln Castle on October 27.

Unfortunately she hasn’t been able to secure the costume for the event due to short notice but there will be an alternative sausage costume available on the day for her to wear.

Mark Brewer, organiser of the sausage festival said: “Luckily we hire our ‘Mr Sausage’ costume from the British Pork Executive, which myself and other members of the rotary club take turns in throughout the day.

“Of course Mrs Makinson-Sanders will be welcome to get into it if she wants to.”

The costume that many people said looked like a penis, made a national impact, featuring on television show ‘Have I Got News for You’ and comedian Dara O’Briain said it was his favourite news story of the year.

Councillor Makinson-Sanders said: “Had I not been a Mayor, nobody would have been bothered but I’ve had a column in Private Eye and the news has spread all over the world, even into China.

“I will appear at the festival as the ‘Sausage Lady of Louth’ as I think it is wonderful that we are showcasing the amazing foods we have in Lincolnshire, we are second to none and we should blow our own trumpet more often.”