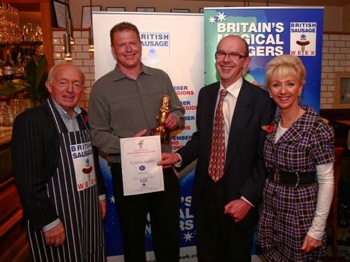 The competition marks the high point of a week of activity to celebrate British Sausage Week 2009.

Charles Clewlow, who was one of many outstanding entrants, won the regional heat with his sausage containing Pork and Nantwich Blue, which he has made magical by the Nantwich Blue cheese which compliments the pork magically. It’s a soft and creamy blue cheese with a spicy finish – an indulgent cheese without the harshness of stilton. A truly magical banger!. Charles Clewlow has won a prestigious Banger Award, a place on the British Sausage Week 2009 map of award-winning sausages and received £150 to donate his preferred charity, the Cystic Fibrosis Trust.

The nation’s favourite illusionists Paul Daniels and Debbie McGee have led the search to find Britain’s Magical Bangers. Everyone knows there is something a little bit magical about sausages and British Sausage Week 2009 is uncovering the secret and revealing what makes a really good sausage. Butchers from across the country have entered this national competition and Paul Daniels and Debbie McGee are travelling the country from Monday 2nd November tasting a plethora of the best sizzlers in the country to crown the magical ones in each region. 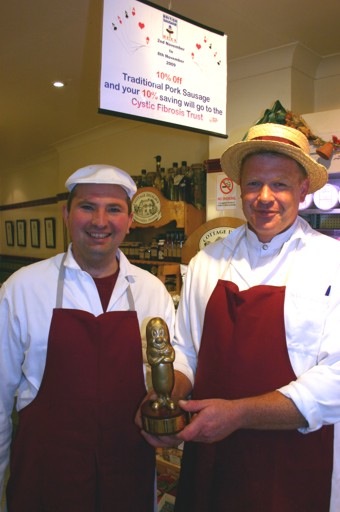 The men behind the sausage – K Pieta and T Cox

Commenting on Charles Clewlow’s winning sausage, Paul Daniels said: “The standard of entries has been so high this year that it was truly difficult to pick just one winner from the finalists. Having said that, the Pork and Nantwich Blue sausage was absolutely delicious, and truly is the Magical Banger for the North West region.”