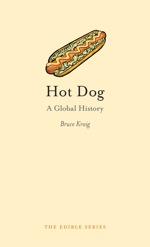 I just got a copy of the book by Bruce Kraig called “Hot Dog – A Global History”. It’s part of a series called The Edible Series. I’ll review it as soon as I’ve had chance to read it. I must say it looks like it’s going to be a great read.

The publisher says this about the author:

Bruce Kraig is Professor Emeritus in History and Humanities at Roosevelt University, Chicago, and the founding President of the Culinary Historians of Chicago. An inter­nationally recognized food historian, he has been host and writer for a series of award-winning food documentaries for PBS, and has also appeared on ABC National News, Good Morning America and BBC News. He has written several cookery books and his articles have appeared in the Chicago Tribune.

Can’t wait to read it!