Luckily I stumbled upon Dave’s Kitchen the other day and this little cheeky Lamb Sausage recipe.  Fortunately he’s kindly given me permission to stick it here and tweak it in the future. 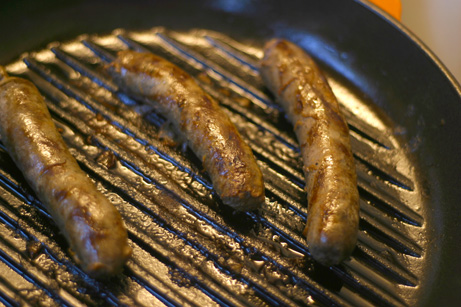 There’s a lesson every cook learns when he’s first starting out, and maybe re-learns many times thereafter. It is, simply: I can make that! It’s when he realizes that some food he’d always encountered only as an already assembled thing, that seemed to have been created by some mysterious procedure, is something he can create himself at home, in his own kitchen.  In that moment he has taken that food back from the chefs and supermarkets. Whether he chooses from then on to always make this food himself, or whether he goes back to allowing the pros to make it for him, he’s broken its mystique it and gained an understanding of what’s inside it. 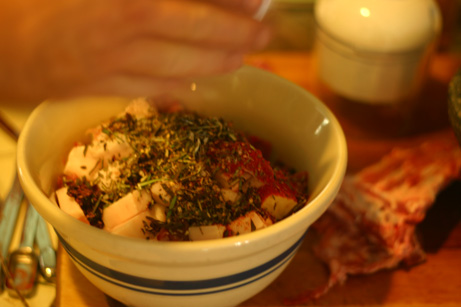 It’s a lesson I learned again a couple of weeks ago when I visited my brother Joe in Vermont and he suggested that we make sausage. “Make sausage,” I thought “you can just make sausage?” Somehow, I’d always thought some special machinery or a secret, unobtainable ingredient was required to transform meat into actual sausage.

But  it turns out all that’s really needed is meat, fat, spices, and something to chop them all together with. A chef’s knife might do, but there are some gadgets that help to do the job properly.  A meat grinder or food processor will ensure that the meat, fat and spices are thoroughly mixed and have the even texture you expect in sausage. 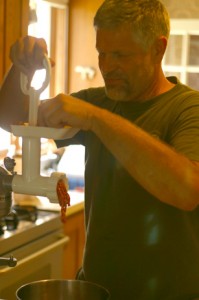 And if you want to pack your sausage into links (rather than patties), you’ll need sausage casings and some kind of sausage stuffer.  Sausage stuffers come in many shapes and sizes, but perhaps the most common for home use, and the one my brother and I used, is the sausage stuffer / meat grinder attachment to the KitchenAid stand mixer.

As for casings, Joe managed to find them at his local supermarkets. That’s Vermont, though, and people up there expect such things to be on hand. You may need to seek out a butcher shop.

Other than that, you just need a recipe. Sausage recipes are as endless as, well, as endless as there are kinds of sausage. We were after lamb sausage, since Joe had a lamb he’d recently bought all wrapped up neatly in butcher paper parcels in his freezer. Interestingly, all of the the recipes called for pork fat and not lamb fat – lamb fat being, I suppose, a bit harder to come by. 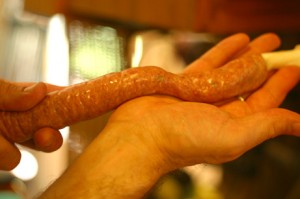 This being Vermont, we didn’t have to look far to find pork fat – we got ours from a farm near Middlebury.

This part definitely works best with two people: one person pushing the meat mixture through the grinder and one person holding the casings as the mixture feeds into it. I found that it helped to force he mixture down into the casing with my hands, since the  stuffer didn’t to push the meat through with enough force to fill out the casings for nice plump sausages. Twist the sausage into links as you go, or wait until you’ve filled entire casing is filled and then twist it into links. Lay it out in a single layer on a baking sheet and freeze. Amazingly, it’s sausage!