Free Range Pig in a Day

From the moment I first heard about Food Safari I knew this was going to be an amazing experience. They offer a safari food experience which is something for everyone from serious chef to fellow foodies. I was counting down the days for weeks before the day finally arrived for the Free Range Pig in a Day.

A better field to fork experience is impossible to imagine.

The day started at about 10am at the Anchor at Walberswick. This in itself is possibly the finest venue for this sort of experience. A gastro pub is an understatement – more on that later. As I drove through the sleepy Suffolk countryside I could feel the anticipation mounting. After an introductory chat, coffee and bacon sandwich we headed over to Blythburgh Free Range Pork. 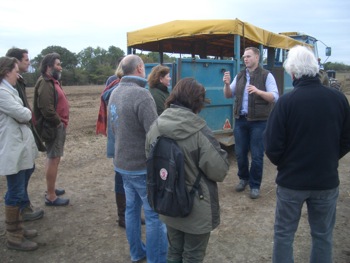 Blythburgh Free Range Pork has an excellent and well deserved reputation for their farm which works to the highest welfare standards. We were treated to a talk by Alastair Butler who, with his brother, is the second generation of the Butler family involved with the farm. The pigs are kept very well and this, in part, accounts for the taste of their pork. The tour of the farm continued in true safari style in the trailer on the back of the tractor.

Alastair is both knowledgeable and also extremely personable and this rare opportunity to see one of the top three pig farms in the UK was inspirational. I hadn’t realised that mass produced pigs go for slaughter at 18 weeks whereas his go at 24 weeks and that maturity is easy to pick up in the flavour of his meat.

Pigs in other parts of Europe have six inches or so to move around in their “cages”. Alastair’s pigs run around and roll in the mud to keep cool. They live stress free lives and this too adds to the flavour. I jumped in to meet the pigs up close and was surprised to find they are much cleaner and friendlier animals then you think they might be. 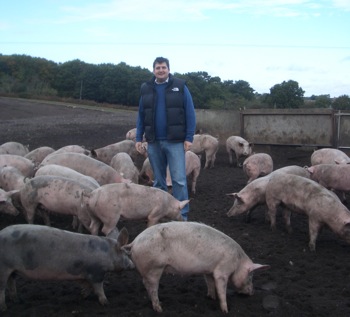 Back at the Anchor after refreshments the butchery demonstration started. Suffolk butcher of the year Gerard King (of Suffolk Food Hall) started with the basics and gave us ringside seats and a top quality commentary as he butchered half a Blythburgh pig. 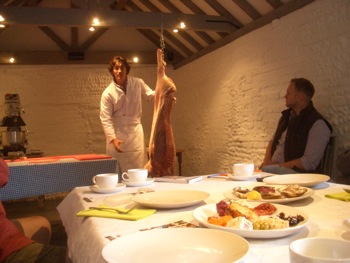 One of the first joints to be prepared was swiftly taken away to the kitchen to be cooked for our lunch. This was an absolutely compelling demonstration although I had to take my eyes off the action once or twice to gobble a fresh oyster or have a pick at some Spanish hors d’oerves.

In some cases Gerard drew our attention to a certain cut of meat and described it’s virtues. It was then quickly taken to the kitchen and returned cooked with accompanying local vegetables so we could try it first hand. This was an amazing part of the demonstration and provided an immediate realism which I have not previously experienced. 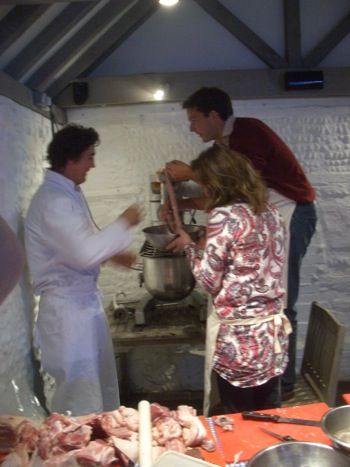 Then we got the chance to get hands on and start making sausages under Gerard’s expert guidance! There was a variety of ingredients available to join the succulent free range pork and a wide range of sausages was produced which were then put on the BBQ while we tucked into some which had just finished cooking. This was washed down with some Adnams Regatta. 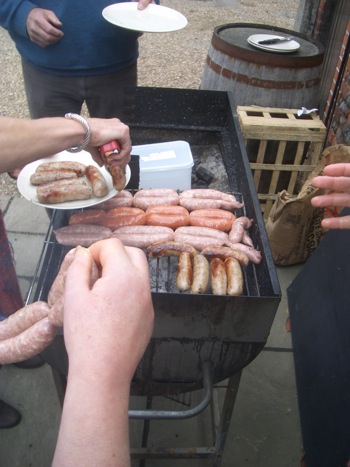 After the sausages had been devoured it was time for lunch. To say the food at the Anchor is amazing is an understatement. The main course was loin of pork, cassoulet with cannelini beans and cavolo nero joined by Green Jack Brewery’s First Gold single (Suffolk) hop beer. Mark Dorber (owner of the Anchor) then entertained us with a commentary on the beers accompanying the meal. His beer knowledge was refreshing and certainly expanded my horizons.

The beer and food pairing continued, with entertaining commentary, into the cheese course. The beers on offer were as much of a revelation as the cheeses. We then moved onto The Anchor’s pudding plate of cardamon pannacotta, brown bread ice cream, meringue & autumn fruits and spicy apple cake with Adnams Innovation.

The Food Safari concept is brilliant. It is both an education and a tremendous gastronomic experience which I cannot recommend highly enough. Future Safaris include Wild Meat in a Day and a Beer Safari. If I had time I think I would be out on Safari every weekend. This really is the kind of foodie experience that normally money can’t buy. Polly at Food Safari has somehow managed to package up this life changing experience and, at £150 a person (or £250 per couple), I think it’s a bargain.