September’s festival was also a victorious event for butcher Icarus Hines, whose Norfolk Sausage was the “people’s choice” in a Battle of the Bangers competition.

When the two men discussed their success at the awards evening, they realised their expertise could be combined in a product that encapsulates the locally-sourced provenance, quality meat and supports a local supply chain. 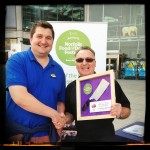 Mr Hines said: “I won the Battle of the Bangers by using free range pork, and while I was at the awards dinner, Rob won the Field to Fork prize for producing rare breed pigs. I thought: ‘Wow, this is a chance for me to make my most popular sausage with his award-winning rare-breed pork’.

“It is a marriage between two people who got involved in the festival and are now able to make a unique product that’s a little bit of Norfolk. That is what the festival is all about.” 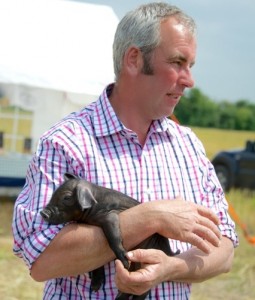 Robert Simonds, owner of Scotts Field Pork, said: “This is great for Norfolk and it comes from an opportunity borne of the Norfolk Food and Drink Festival. It is about people finding out about each other and making up their own supply chain.

“We would not have a business unless we deal with the best butchers, and Icarus is definitely one of them. Quality meat is our market, so the more quality businesses that come on board, the better.

“Our pork makes great sausages and if people like eating them they are buying into the local food chain and supporting a rare breed.”

The new Norfolk Sausage, made to a low-salt recipe, using black pepper and a hint of nutmeg, is on sale at Mr Hines’ shops at Cromer and Sheringham.

The product will be officially launched during British Sausage Week, from November 3–9, when Mr Hines will also be inviting north Norfolk schoolchildren to his shops to try their hand at sausage-making.