Earn top marks for creativity: be your own sausage maker 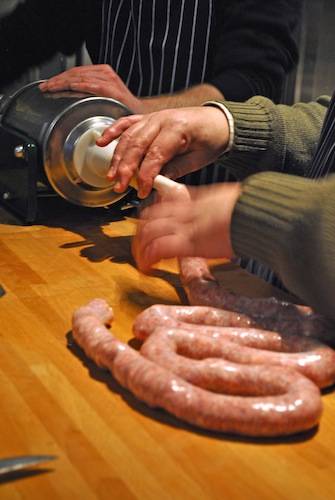 What a delight to see the Daily Telegraph covering home sausage making and helping it become even more common!  Making your own sausages is the perfect way to ensure you know exactly what you are eating and also a great chance to let your creativity run wild!

My search for the greatest sausage is over — and I didn’t even have to leave the house to find it. Of the many excuses dreamt up to loiter in the kitchen, near the television and the ever-addictive Olympic viewing schedule, my afternoon spent making sausages was the most enjoyable.

The inspiration came from kitchen gadgetry experts Lakeland, who have recently launched a series of kits designed to revive lost skills. As well as cheese-making paraphernalia, jam pans and other preserving tools, there are three types of traditional sausage-making sets (£8.99). The timing is perfect: these kits are all the justification you need to stay in and keep an eye on airborne gymnasts and triathletes.

If you have read this far, I take it you are not one of those who exclaims “that’s what supermarkets are for” at the thought of DIY sausages, let alone smoking a ham up a chimney or filling cupboards with jam and pickles. But can it be true that Lakeland, known for its strangely compelling catalogue packed with time-saving ideas, has identified a group who find themselves wanting to spend more, not less, time in the kitchen?

Janet Shuster of Designasausage.com in Disley, Cheshire, who makes the kits for Lakeland, says the number of such people who relish an afternoon lost in filling and linking yards of casings runs into thousands. The firm sells all the equipment needed to make sausages, from natural casings to sophisticated machinery.

“We have approximately 7,000 private customers in the UK who like to make their own sausages, and 10,000 worldwide,” she says. This makes sense to me. If there is one thing I would miss as an expat, it would be the peerless British banger.

Shuster and her friend Gaynor Preece set up the company in 2000. “We were already in the commercial side of the sausage business, and had visited factories and seen how much preservative and chemicals were added,” she says. “We thought that — post BSE and other problems — there must be people who would want to make their own.”