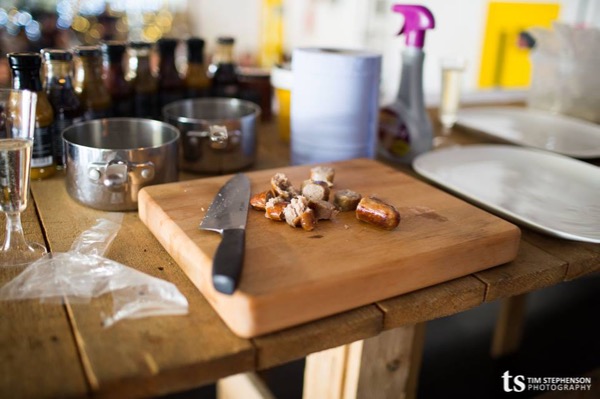 Having originally been put off by the snow, the winners of the Hampshire Fare contest came together to celebrate their achievements – and it was a Bishopstoke butcher who took home the bacon.

This year’s competition attracted a record-breaking 261 entries from 46 butchers across the 12 categories, which were all judged by a panel of national judges.

It was Ambrose Sausages who enjoyed the greatest successes, being named as champion for the best home-cured bacon, the Hampshire charcuterie champion and supreme champion.

Phil Ambrose runs the butchers with his wife Sue, and the couple have done so for the last five years.

Phil said: “We are really pleased to have won, the awards ceremony was a superb event and you enter because of the fantastic judges and experts who rate you. Of course it was a record-breaker too.

“To win was just the icing on top of the cake.”

Phil trained as a master butcher before leaving the trade altogether.

But his wife Sue, who is a trained chef, suggested the pair start up again five years ago, so the two bought some pigs as they already had land in Lower Upham.

Phil added: “We don’t actually have a shop, we just use the markets every week and even visit London to sell our goods. I send my friend up there to Pimlico weekly. It’s just us and a part-time helper, and we’re developing new flavours too.

“Sue helps with that, and we have two new salamis coming out.”

The Good Life Farm Shop in Winchester also enjoyed being named Hampshire Sausage Champion at the awards on Thursday night.

The announcements follow the judging that took place at Eastleigh College last month.

The snow had postponed the original awards from March 1.

Tracy Nash, commercial manager at Hampshire Fare said: “The judges were extremely positive about the quality of this year’s entries.

“Many of the judges have been involved in this annual competition for several years and were able to notice real improvement in the standard of the products entered.

“Our butchers and producers did Hampshire proud.”