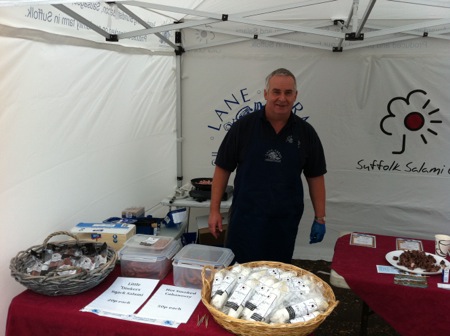 TWENTY-five years after the hurricane many changes have taken place at Lane Farm.

This year Sue and I celebrate 25 years at Lane Farm. We had just exchanged contracts to buy Lane Farm when the October hurricane of 1987 hit and blew half our farm away. This was our introduction into farming and at the time could not help thinking what have we done? Fortunately we had some great friends and amazing neighbours who helped us rebuild and repair our farm and in November we were able to take delivery of our first pigs to set up a small breeding herd. We sold all the male pigs (boars) as stores to a local farmer to fatten and kept the female pigs (gilts) to finish and sell on to other pig farmers as breeding stock through a company called Master Breeders and latterly Rattlerow Farms.

The pig industry is renowned as a copper or gold industry. One minute you are making a bob or two and the next minute losing an absolute fortune.

In the early 1990’S we became concerned with the number of outdoor pig breeding units that were setting up everywhere. This only meant one thing to us and that it would lead to an oversupply of pigs coming onto the UK market causing the price that we would get for our pigs to fall. We knew that if we were to survive the next slump in the market we would need to diversify in order to stay in business.

Selling breeding stock meant they had to pass many tests, one being that the gilt had to have a minimum of 14 teats. Quite often we would end up having a fabulous pig with only 12 teats which meant she had to go to the local abattoir and would not realise her true worth to us. We have always had an interest in good food and began looking at ways that we could add value to these lovely pigs. To do this I booked myself into a local school of butchery to learn how to make sausages, bacon and basic skills in pork butchery.

Having gained this knowledge we looked around to see if there were any grants around to help us convert an old dairy into a small cutting room and it was with the help of a small 5b grant in 1993 we were able to do this. We then set about experimenting in making different types of sausages and this was when our two daughters came in handy. Anyone with small children knows they are always very honest with their opinions so were a great help in deciding which sausages were good enough to sell. At the time most sausages contained around 65% pork but we wanted ours to be better by having a higher meat content of 80%.

We were very lucky that we have a very good village shop in Laxfield that at the time was owned by Mr and Mrs Sparrow who gave us an outlet to sell our sausages, bacon and fresh pork. This is now owned by the co-op but still remains a very good outlet for us thanks to the wonderful support we have from the village.

Following on from the success in Laxfield we went on to supply other village and farm shops and in the late 90s we attended Alder Carr farmer’s market which was the second in the country to be established. The farmers markets became very popular and allowed our business to grow so every Saturday Sue would head with one daughter in one direction to do a market and I would head off with our other daughter to do another. On Sunday we would all go up to London to attend the Islington farmers market. It is with credit to our daughters that they never once complained about being dragged out of bed at 5am on weekends to come and help us. It was a huge amount of effort and hard work but had to be done to survive in business. When we got to London we even had to lock them in the van as we felt it was to dangerous to let them play on the pavement.

The Farmers markets not only enabled our business to grow, but was a great way of testing new products and getting good feedback from our customers. It was from customer enquiries from the markets as to why didn’t anyone make salami in the U.K. that inspired me to find out why and then learn how to make it. This involved several journeys to Europe to pick up tips from various producers but I knew the only way to really find out was to make it and suck it and see. We took the “bull by the horns” and built a purpose built drying room. After many months of trial and error we had a product that we were happy to sell and Suffolk Salami was formed and we were one of the first producers in the UK to sell it commercially. The salami has become very popular and along with our chorizo did well in the great taste awards. Our chorizo beat many of the Spanish entries at this blind tasting event which we were thrilled with.

Our aim has and still is today to produce the highest quality products at an affordable price. It’s not about just adding value, but our enjoyment in doing what we do comes from when people e-mail us telling us how much they enjoyed the bacon, sausages or ham they have just purchased.

Supplying farm shops is still the main backbone to our business but when the East of England Co-op came along and took over three of our village shops they kept us on as a supplier and over the last few years have been very active in promoting local food in their stores.

Full story from the East Anglian