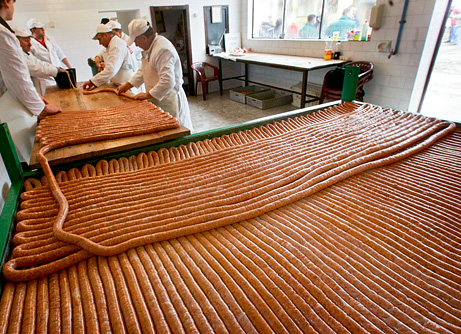 As they waited in anticipation, a half-mile long Cumberland sausage was towed into view by a tractor.

After nine hours stuffing the sausage, using more than 200kg of locally-reared pork, Mr McClure transported the mammoth banger to the Square for cooking.

Barrow engineering firm, Handmark Engineering Co Ltd, was tasked with creating a super-sized skillet in order to cook the sausage and secure the record.

The job fell to metal workers Les Vickers and Lee Schwer to create the contraption.

Carl Knowle, of Handmark Engineering, who helped coordinate the project, said: “It’s not the kind of thing we do every day.

“The lads on the shop floor enjoyed doing it.

“Gary came to us with the basic idea of what he wanted and we made it.”

Dozens of excited onlookers welcomed the sausage’s arrival in to the Square on Wednesday night.

And, under the watchful eye of a television film crew, the Cumberland sausage was placed on to a hundred or so disposable barbecue sets.

The record attempt was being filmed for what is believed to be a new Channel 5 cookery programme and is expected to air in November.

The show’s presenter, actor Sean Wilson – best known as Martin Platt from Coronation Street – helped make the record breaking banger, as well as following its journey from Mr McClure’s Low Althurstside farm right up to its cooking – and, of course, eating.

Charlie Boydell-Smith, 20, was among the crowd that enjoyed the fruits of Mr McClure’s labour.

He said: “The sausage was lovely. For such a large sausage it was still full of flavour.”

Scott Varty, landlord of the Manor Arms, in Broughton, was pleased with the extra business the sausage’s arrival brought and said Mr McClure was thrilled when the new
record was confirmed.

Mr Varty said: “I came back from seeing Gary in the afternoon and was telling people it would be coming down and that they just had to come and see it.

“Gary was over the moon with his award.’’