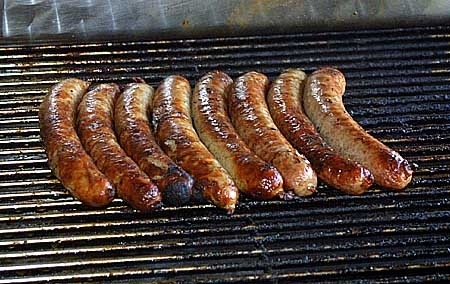 BARBECUE bangers made by a Bolton butchers have sizzled their way to a national award.

The Rishton Lane butchers lifted the trophy at the grand final which took place at the Weber Grill Academy in Oxford.

Frasers assistant manager Alison Woodcock said: “We’re thrilled. They are a great sausage for barbecues because they’re thin, but not too thin, so still nice and juicy. We knew they would do well, but the fact they’ve won is just brilliant.

“The sausages are our traditional recipe and are the same as the ones we sell over the counter in the shop.” Concocting the recipe was a team effort by all the staff in the shop, but the winning sausages were made on the day by Frasers butcher Zach Green.

Frasers were also national runner-up in the speciality burger category for their rump, topside and skirt burger with bone marrow.

Finalists were chosed from seven regions of the Q Guild, which represents 110 elite butchers from the Scottish Highlands down to Cornwall, after a number of regional heats. The winners were selected by a panel of judges, including Winchester’s Jeremy Fowler, the only master BBQ judge in Europe and former executive chef to the Sultan of Brunei and personal chef to Mohammed al Fayed.

Full story from The Bolton News