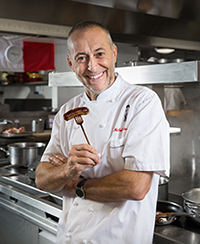 Jack wanted to create essentially a Ploughman’s lunch in a sausage so a taste of pork pie, cheese, apple all combined in one delicious sausage.

“We really tried to create a recipe which would help people think a bit differently about the humble banger and it’s great to see it was such a hit with the judges,” said Jack.

“Getting up to collect our banger was such an honour and totally unexpected, and we’re thrilled to have done the region proud with our innovative sausage.”